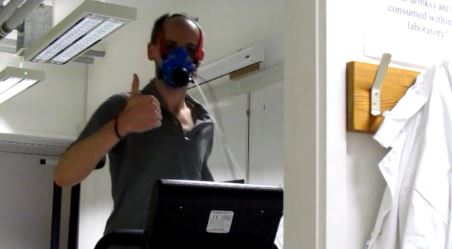 As runners, we’re always measuring ourselves in some way or another – how far, how fast, new PBs – but with my biggest running challenge on the horizon I wanted to measure myself very specifically, with the help of RaceFit Consulting.

Usually, lab testing is the playground of elite athletes or people taking on extreme challenges like Guy Martin to help them get the most from their training and to perform to their potential.

It’s something I’ve only ever seen on TV but since getting involved in coaching I’ve heard a bit more about it and my interest was piqued.  As a self-confessed data geek it doesn’t take much – show me a graph and chart and I’m anyone’s!

I run with heart rate monitoring watches normally so my coach and I have a reasonable idea of what my heart rate does at different efforts but like a good boy scout I like to be prepared (despite never being in the scouts!) and what better way to find out exactly what’s happening when I run, than to become a lab rat?

I’m not an elite athlete.  I’m not even a top club runner but with a busy spring training for my first marathon I wanted to make sure that my coach and I could focus my training to get the most out of every session.  The lab tests would provide us with data on my heart rate, oxygen consumption and how my body consumes fat and carbohydrates – all of which should help tailor my marathon training plan.

Up and down the country there are university sports science labs that have all the equipment and expertise to carry out these tests.  If you’re lucky you might be able to get a test for free as part of a research programme or, like me, you’re so keen to have one you can pay for it.

Living close to Oxford meant I could call on RaceFit Consulting, based at the labs of Oxford Brookes University, to put me through my paces.  So off I went on a cold, wet, dark night in December.

It’s years since I’ve done any indoor running and all I remember was how boring it was.  The thought of doing any running on a treadmill was uninspiring.

The thought of doing treadmill running with a claustrophobic face mask filled me with dread.

The thought of gasping in a mask on a treadmill while trying to run as fast as I can pushing my body to the limit… why was I doing this again?!

Tom from RaceFit Consulting talked through exactly what the test would involve: steadily running at gradually increasing paces whilst hooked up to a heart rate monitor,  a mask and every few minutes a blood sample would be taken from my ear lobe.

Before we got started James, a third year student, needed to get my height and weight.  My height was no surprise to me: 179.5cm.  My weight, however, was a touch lower than I’d expected.  Admittedly, I can’t remember when I last weighed myself but considering I thought I was 75kg, I was amazed to hear that I only recorded 66.7kg on the lab scales.  No wonder I’m always having to pull my trousers up!

Rather aptly, the tune that was playing as I started the warm up was Here It Goes Again by OkGo – if you don’t know why it’s apt, then check out the video here:

I survived the 10 minute easy warm up on the treadmill without collapsing with boredom so it was time to fit the mask; this was the first thing I had been apprehensive about.  I’d heard stories of these masks being very restrictive and uncomfortable but, despite the straps restricting part of my view, the mask was actually quite comfortable.

Now that I was strapped in, it was time to give blood.

With my incredibly low pain threshold I braced myself for the worst but had another pleasant surprise – I didn’t even feel the pinprick and Tom confirmed that he’d got what he needed.  So it was time to get running!

Starting at a relatively conservative 10kph wasn’t going to pose me an issue although jumping on to a surface already moving at that pace was fun!  The mask hid my childish smirk as my legs scrambled, cartoon-like and then suddenly calmed down after finding they didn’t need to go that fast.

Four minutes later it was time to straddle the treadmill to provide another blood sample and get a bonus 60 seconds of rest, not that I needed at this point but it would come in handy a bit later.

With the treadmill cranked up to 11kph it was time to scramble back on for another 4 minutes before cycling through a few more times:  straddle, bleed, rest, speed up, scramble, run.

At the end of the 5th cycle I was working hard so Tom thought it time to hunt my maximum heart rate and VO2Max.  Now the pace would increase by 1kph every 1 minute and there was no stopping until I couldn’t go on any more.

This was the second bit that I was apprehensive about.  One half of me was concerned I would decide to stop too soon (my mental toughness isn’t what it could be!) and the other half was worried I’d completely lose it and end up in a heap on the crash mat with treadmill burns.

As my legs felt like they were blurring and burning in equal quantity, my breathing started to sound like Darth Vader.  I made it up to 17kph and survived for the whole minute, although I nearly gave in after 30 seconds.  I’m a bit disappointed that I didn’t at least start the minute of 18kph running but considering my legs had already been as fast as they’ve ever been (17kph is about 3:32 min/km pace) maybe going any faster would’ve resulted in me saying “hi” to that crash mat!

After a final blood sample I was released from the mask and could take a much more leisurely pace to cool down and reflect on what I’d just been through.

To illustrate the assessment I’ve wrapped up the entire test into less than 3 minutes:

Tom was able to take us through some of the headlines there and then, with the full report to follow (in fact it’s just dropped into my inbox so more on that, and the implications on my training, at a later date).

The biggest surprise was that my heart rate had, especially at the lower speeds, been unusually high.  Even at 10kph (6min/km) I was at 167bpm – yet on my long run last Sunday I averaged 5:40 min/km and my heart rate was well nicely between 150 and 160.

Some of the increase could probably be attributed to being slightly anxious.  Some could be down to running indoors – despite fans and open windows it was much warmer than I’ve been running in recently.  And some of the impact could be down to the remnants of the cold I had last week.  Even so, it was slightly unsettling – and a little annoying as this means Tom’s heart rate zone assessments won’t be as good as they could have been with a more regular heart rate performance.

Luckily the heart rate monitor on my adidas miCoach SmartRun proved to be consistent with the chest strap the lab had me hooked up to so Tom has described a good way I can do some further treadmill tests to get a better view on this.

In hindsight, I needn’t have worried so much about the mask or even the test itself.  It really wasn’t that bad at all.  Also, is it right to think I could have gone for longer?  Perhaps.  Is it strange to say I enjoyed it?  Almost definitely.

Once my coach and I have been through Tom’s report and looked at how it’ll influence my marathon training plan I’ll write some more but for the time being, don’t think that these tests should remain for elite athletes only.  If you’ve got a big challenge ahead or really want to claim that PB that seems to be out of reach then it could be worth considering giving one a go.

If you’re in the Oxford area get in touch with Tom at RaceFit Consulting a shout if you’re interesting in learning more about the testing options on offer.  If you do contact them, please mention that you saw my review here!

9 thoughts on “Measuring Up: My Running Lab Test”

Leave a Reply to Plodding Along Nicely Cancel reply

My journey from charity plodder to running coach (and back again!)